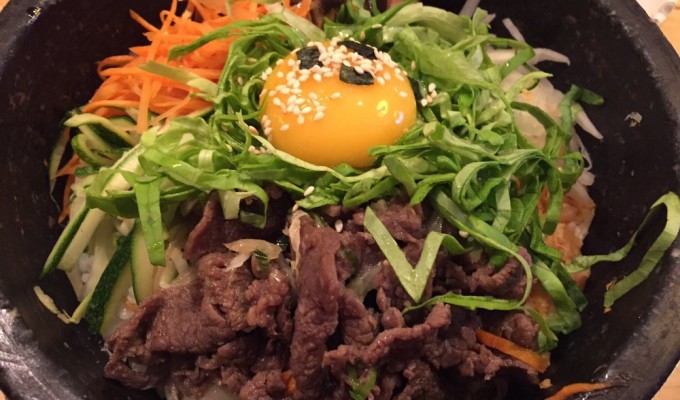 In South Korea, Jeonju, Jinju, and Tongyeong are especially famous for their versions of bibimbap.[3] In 2011, it was listed at number 40 on the World’s 50 most delicious foods readers’ poll compiled by CNN Travel.[4]

The name bibimbap was adopted in the early 20th century. From the Joseon Period (1392–16th century) until the 20th century, Bibimbap was called goldongban, which means rice made by mixing various types of food. This dish was traditionally eaten on the eve of the lunar new year as the people at that time felt that they had to get rid of all of the leftover side dishes before the new year. The solution to this problem was to put all of the leftovers in a bowl of rice and to mix them together.[5] Bibimbap is also thought to have been eaten by farmers during farming season as it was the easiest way to make food for a large amount of people.[citation needed] Bibimbap was served to the king usually as a lunch or a between-meal snack.[6]

Bibimbap is first mentioned in the Siuijeonseo, an anonymous cookbook from the late 19th century.[7][8] There its name is given as 부븸밥 (bubuimbap).[9] Some scholars assert that bibimbap originates from the traditional practice of mixing all the food offerings made at an ancestral rite (jesa) in a bowl before partaking in it.[10]

Since the late 20th century, bibimbap has become widespread in different countries, due to its convenience of preparation. It is also served on many airlines connecting to South Korea.